Travel is an exercise in controlled change. You research, plan and spring for tickets, get your shots, bleed your bank account and go. You choose, to the best of your ability, the settings, food, experiences, then rush off and enjoy them. Fiestas and new friends are welcome additions to the mix; mudslides and kidnappings are not. Travelers, of course, vary in their ability to tolerate novel experience. Some throw a fit if their soap isn’t wrapped; some don’t think they have really traveled unless they have lived with the natives. I fall somewhere between these poles.

I just had nine glorious days Mexico with my younger son. We spent most of our time in the state of Chiapas, visiting Maya ruins, many of them deserted 600 years ago; then we ended up in Mexico City, one of the largest (and reputedly among the the most polluted) cities in the world.

I worried about everything before we left. Would we get kidnapped in a taxi? Would we contract malaria, miss our connections, get lost? Would I lose our passports, tickets, and generally prove myself to be an incompetent duffer? How about all of the above?

Everywhere the people were gracious, courteous, relaxed, and amazingly patient with my Spanish. You catch someone’s eye on the street and he says buenos tardes, good afternoon, even in the city!

Here is what the Mexicans are great at:

2a. Palenque, too, was astonishing. Coming upon it, in the middle of the 90 degree jungle, is like stumbling upon the Acropolis. I was not prepared for its beauty. Yaxchilan and Bonampak were both lovely as well, outstanding for their stellae and brilliant murals, respectively.

I was really glad not to be driving those perilous switchbacks. Maybe that’s why they have movies, so you won’t be tempted to look down.

We had a blast. We came home to cool temps, buds barely inching along, and two members of the extended family having been in the hospital. None of these changes could I control. 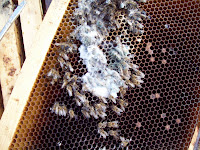 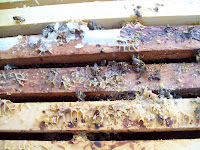 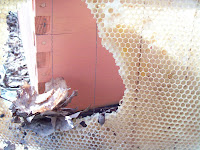 It starts with February Fretting. This is when I start worrying in earnest about the winter survival of my bees. I scan the weather predictions obsessively, check the thermometer for the magic number, 55 degrees, at which you can safely open the hive and not chill the bees. They need their pollen patties, which provide the hive with much needed protein to jumpstart the queen's laying.

On a balmy day in early March, I was looking around for the cordless drill. I planned to take off the screwed in lath that held the insulation on our beehives. Once that came off, I could take off the top hive body, which only held the syrup jars, and give the girls the pollen patties right on top of their frames.

I made my way gingerly through the pass we cut in the snow to the shop. I looked over at the garage that held the wood splitter and heard-- I was quite sure of this--a bee buzzing.

My heart leapt. It could be one of the hive bees. After almost five feet of snow in late February, they could be, against all odds, alive.

I found the drill, rushed out the the chain-link enclosure, dug open the door, tromped in and beheld two hive almost buried in snow. That's a bad sign, because usually, even if I haven’t shoveled around the hives, they are warm enough to have melted off some of the snow around them. Also, there were no bees in evidence crawling around the entrance. I knocked on each hive. Usually a few guard bees will come out in all but the worst weather to check out the visitor. Nothing.

Even when I went out yesterday to perform the bee post-mortem, I still harbored a tiny bit of hope that I’d been wrong, and would find a few bees doing their merry circle dance in front of their respective entrances. But the only living inhabitants were two portly mice, who waddled away when I opened up the Amazons’ hive.

What went wrong? I was afraid it was mites that had weakened and killed off the hive. There was a strange pollen like residue on some of the bees’ bodies. There also didn’t seem to be many bees.

There was a lot of honey left, which sadly, does not preclude the bees starving. It’s all a matter of how far they can move out of their cluster to feed.They have to maintain the queen at 90 degrees, so form a basketball sized cluster, which they keep warm by flexing their wings in a kind of shiver. Bees are constantly rotating from the warm inside of the cluster to the more frigid outside, and back again. Sometimes, though, with honey just inches beyond the bees’ reach, they die.

There were several small clusters of bees, heads thrust in cells, and a few bees on those bees’ backs-- for warmth? This is the saddest sight, that these charming, assiduous creatures starve/freeze so near to their stores.

A lot of people lost hives this year, many of them better, more experienced beekeepers than I. The only thing I can do is to keep trying, avail myself of the collective wisdom of bee associations, suit up and go stick my nose in bee business more often so that I can trouble shoot a little better. I’m going to a Q&A session Wednesday to see if I can find out what went wrong.

And back in December, I ordered two packages of bees, with queens, just in case.

Images: the top image with the red is where mice have eaten the wax and honey, and added little bits of leaves for a nest.

The one in the middle is a top-down view of a frames, onto which I had poured some sugar as a desperate hold-over for the bees. Then the one on right-- bees head-down in the cells, with mold, since they've been dead awhile. I've have prettier images next time!

Posted by Cloudlands at 2:16 PM No comments:

We long for the “olden days” because they come with an answer sheet. The present is always a bit scary. You don’t know what’s going to work out and what will later be seen as a colossal mistake.

When someone hears we’ve moved to Vermont and are slowly rehabilitating a farm, there is often a look that comes into his eyes, a dreamy longing for a sweeter, simpler life that has very little to do with the reality of country life and farm rehab.

When I see that look, I know I’m in trouble. Because usually the logistics of this person’s life preclude him from having to milk goats, or dock lambs’ tails. If I got goats and milked them, he would have a wonderful vicarious experience, without having to haul water in blizzards, or extract a goat from wire fencing at 4 in the morning, or pay to have the goat-trampled hood of a guest’s car replaced. The downside of living someone’s else’s fantasy is that you probably won’t do it the way he’d do it, and that his hearing is selective. He’s invested in the fantasy.

For instance, we get more eager advice on country living from urban friends than we do from our local neighbors. I have a dear friend who lives in suburbia and wants us to get miniature ponies. I don’t know why, except she thinks they are cute. The pictures I see on the internet are of very woeful looking little animals (some wearing sneakers, for some reason) being treated like dogs, or worse, like hairy children. The idea of horses too small to trample or kick you into next week (I’d wager they can bite, though) must appeal, hugely. The people in these pictures are clearly besotted, cuddling these animals, walking them like dogs, and actually tucking them into bed. These are some disturbing images. Somehow, for some people, it must be more fun to have a horse you can pretend is a dog, than to just go down to the pound and get a regular (but very grateful) mutt.

You knew it was coming: the phenomenon of miniature ponies is not unlike the fantasy of living in Vermont. The fantasy is a predictable, controllable thing. Vermont is maple syrup, covered bridges, people saying “Ayup” all the time--country living without getting your teeth kicked in. Whatever problems appear are easily solved, or so the fantasists imagine. There could never be real suffering, let alone disaster, in a place as pretty as this.

As a state, I think we’re lucky to have more than a few civic minded realists on board, ready to engage with the real problems that confront us, thoughtfully and carefully. The closing and decommissioning of the Vermont Yankee nuclear power plant often comes up in conversation. While most of us southerners want to see it closed, we are also aware that we will have to find other sources of electricity, pronto, and conserve it better than we are now.

Last year’s Summit on the Future of Vermont put on by the Vermont Council on Rural Development drew people from across the state to discuss energy, communication, education, transportation, employment, diversity, agriculture and other topics central to the progress of the state. It was a committed, energetic, earnest bunch, clearly enamored of Vermont, but mercifully realistic. It made my heart glow for the future of my little state.

*This week’s blog has no pictures. I direct you to the Miniature Pony site for a real shake-up.

Posted by Cloudlands at 2:05 PM No comments: