I seem to be working backwards, a Luddite-in-training. This weekend I finally learned how to spin. Fiber, not stationary bikes, or Sufi dancing; though it was a surprisingly inspiring, even spiritual, experience.

I went to a fiber sale at Maybelle Farm in Wardsboro. This is a farm in its seventh generation, with 34 sheep, chickens, a lot of fencing and some serious tractor talent. My friend has bags and bags of fiber from her 34 sheep, shorn over the past several years. The bags are marked with the name of the sheep, shearing date, weight and color of the fleece.

Since attending the shearing last spring, I have been thinking about Tinka’s fleece. She is a Coopworth mix; her off-white fleece shines. She’s also huge: her fleece last year weighed 17 pounds. That is a lot of yarn, surely eight sweaters’ worth, once it’s been skirted, that is, minus the debris that gets cut off before washing, carding and spinning.

The opportunity to learn how to spin was provided by Patty Blumgren, of Centre Artisans. I worked on a Louet with a single treadle, a Dutch wheel. I spun big, thick, gray yarn for a rhapsodic hour and a half. It was fun, calming, totally mesmerizing. My yarn was over-spun, i.e., too twisty, but I didn’t care. I rushed home, soaked my little skein in very hot water and then weighted it so it dried sort of straight. And there it hangs, proudly, in my kitchen.

I always wondered what people do with all the yarn they spin. Some people are such prolific knitters, spinning opens up the bottleneck in production and provides them with all the raw material they need. Years ago, my friend Janet bought a chocolate brown fleece for eight dollars, carried around in her trunk for awhile, then skirted, washed, carded, spun and knit it into a beautiful sweater fro her partner Ivy. The sweater is named Emmy, after the sheep.

Alas, I am not one of those knitters. I am trying spinning because I make rugs, and rug yarn is hard to find and expensive. I have cut up wool jackets I’ve found (and felted) from thrift stores; I’ve doubled up worsted weight yarns to use on rugs, but there is always this dry, panicky I’m going to run out feeling at the back of my throat when I think about rug yarn. To be able to produce it myself would be great.

This is the classic refrain of an addict, right? We’re on a slippery slope here. Talk to yarn hoarders 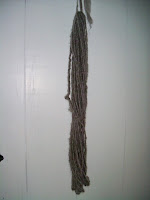 and you’ll find them a remarkably inventive and unrepentant lot. During a knitting group’s discussion of a Bernat tent sale (a big deal, trust me) I ventured that I had no room for more yarn. The woman sitting beside me (whom I did not know) laid a conspiratorial hand on my shoulder. “Darling” she said, “You put it in your luggage.”

The point is, even though there was something mystical going on at that spinning wheel, I’m trying to be practical. We do need to get animals into our pastures to keep them clear. Personally, I dream of yaks, angora goats, but sheep work too. As much fun as it would be to summon our wonderful, laconic vet and present him with an indisposed musk ox, just to see his reaction, sheep are probably the wiser bet.

When I really learn how to spin, the floodgates will be officially Open. Which of course, is how I like them.

Posted by Cloudlands at 12:31 PM No comments:

Wifi in the Mountains 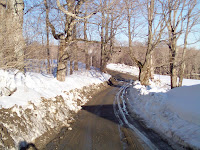 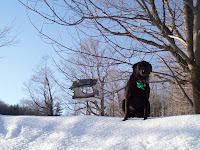 Wifi in the Mountains

Cabin fever isn’t what it used to be. Depressing as it can be to watch yet another snow/sleet/ice storm replace the snow I have been willing to melt (through great concentration, I might add), it used to be worse. Not all the seed catalogues in the world could change the fact you were hemmed in, locked up with yourself and your equally desperate loved ones. You were doing the same old things: dragging out your winter boots, which suddenly seemed to weigh a ton, getting up in the dark, shoveling, mincing you way along icy walkways. Almost every task became a chore.

What about all my pontificating about playing in the snow keeping one sane? If I had time to play in the snow, it would. But it took me two hours to get wood in for the upcoming week, since my dear spouse’s back is out. I tried to have fun doing it. I made a game of tossing the logs from the woodshed over an eight foot snow bank, loading them onto a toboggan, dragging the (now extremely heavy) craft to my car, loading that, driving that to my porch and unloading the wood. Twice. So now I’m too pooped to have any more fun in the snow.

The lack of visual novelty at the end of winter contributes to the problem. Nature is now predominantly white, black or mud-brown. I’m electrified by the red flash of a cardinal. I stand like an idiot in front of the flower store in Brattleboro whose window is full of orchids. I can’t imagine what Inuits do-- well, actually, a lot of them produce art they bring down to Toronto, Montreal and Ottawa. So maybe it would be a good idea to study them a bit more closely. But anyway.

Now, things are different, just because we have DSL /wifi. And not a day goes by that I’m not grateful to have it. I realize most people have made the transition from dial-up with less fuss. For them, DSL is sort of a snore. But being a thorough-going rube, I find the difference staggering.

My system doesn’t crash when someone sends me a picture via email. In fact, I welcome them. I can watch videos online-- I saw Doubt recently-- a wintery sort of flick, to be sure, but very good. My husband found an amazing interview with Peter Sellers. I’ve become addicted to actor interviews at the Actor’s Studio with James Lipton. These videos are what television promised to be but never quite achieved.

The educational potential of the internet is even more vast. Recently my husband watched a YouTube video on how to remove screws whose heads had broken off, or whose head groove had been stripped. (Didn’t you always wonder how to deal with that? Since I've left so many screws stripped, half in, crooked,making my project look like it had been made by a really impatient kindergartner, I was curious.) The video was made by a kid, maybe seventeen, who very matter of factly gave the list of tools you need, an a list of tools you didn’t need, and demonstrated the process very clearly--with none of the condescension one can encounter in hardware stores. It’s education without the attitude!

I have attended “Webinars”, learned how to wet-felt, watched the making of several DIY tumbling composters, my husband has attended virtual classes in business, and we haven’t even scratched the surface of what could be done.

Wifi makes Skype possible, which my son uses to have conversations with his girlfriend with video, I’ve been able to download political organizing materials to work for healthcare reform-- all from our isolated home. Suddenly we are not so hemmed in by our little hills, by the snow, ice, and sleet.

I can only begin to guess how it could transform the economic opportunities in Vermont.

Posted by Cloudlands at 5:25 PM No comments: 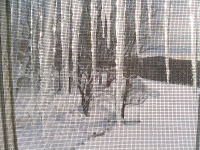 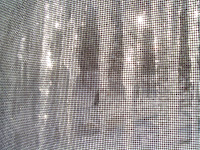 My amusing husband thinks Ivan Denisovich had it pretty easy. He lived with a lot of snow, and he did physical work--big deal. We have snow, isolation, and physical work too. My husband would add to that unpleasant list ice fishing, which, he says would be declared torture if you described it to human rights lawyers.

You get a little hut dragged out onto the ice, see, and you stay in it for hours looking into a little hole you’ve chopped in the ice, into which you’ve lowered your ridiculous fishing line. Then, if you catch something, it will probably contain enough poison to knock off your entire party, if they’re not already frozen to death.

Even without ice fishing, endurance is a challenge to muster at this time of the year. Eight foot snowbanks shrink by inches in the most beautiful, miraculous-feeling spring weather, that is, actually, anything above 40 degrees.

Everywhere else, it’s spring. Of course, in Seattle, where I’m told the daffodils are in bloom and people are mowing their lawns, but also in Boston. Even in Burlington Vermont--no snow! In Amherst the other day, someone was playing conga drums on the green, people were stretched out on the soon-to-be-green grass. One young man was just spread eagled on the bare ground. All thoughts of having to mince across icy walks, or button up were long gone, if only for an afternoon.

When we returned, the landscape was pure winter, with roads a little muddy for all the melting that had gone on. But on the road, between the snowbanks, it was like a walk-in freezer, the snow threw such cold. We hurried inside and stoked the fire.

The question is, why do we do it? Plenty of savvy Vermonters head south in March and April, or at least to non-snowy destinations. Some stay there longer and only come back for summers. We can’t right now, but someday, we could, and might.

There is something though, about embracing what is going on now, however ambivalent you are about still having to shovel a path to the woodshed, the barn. The way we scan the fields for patches of ground (none yet) is certainly a form of love, though a bit on the conditional side. The way we stand on the porch on a windy night trying to find a ribbon of warmth in the gusts, willing the wind to evaporate the snow, is, though delusional, at least engaged with the natural world in some small way.

The way we look for any sign at all of spring is sort of touching, throwing our little hope out to world like a grappling hook, so that it will catch on anything, and hold. What’s the YIddish saying? Man plans and God laughs?

At least time will eventually cure spring fever, whether or not March dumps more of its customarily heavy snow and ice storms.

Posted by Cloudlands at 11:30 AM No comments: