Creative in the Kitchen 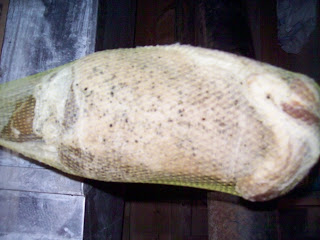 I have just discovered a wonderful cookbook, newly out in paperback, so not all that new to the rest of the world, the brilliant and funny: Make the Bread, Buy The Butter, by Jennifer Reese. She prices out the cost of convenience foods vs. homemade, but here’s the genius part: she also factors in the hassle, the quality and the fun.
In other words, for once it’s not just about the dollars and cents.
Haven’t we all had that stubborn economizing voice whispering to us in the grocery aisle when faced with an absurdly expensive convenience food? “Are you kidding me? I could make it just as easily, and it would be better! Moreover I would be thrifty and uphold the lofty and creative tradition of home cooks who will not be dictated to by the ad department of some giant corporation!”

Here’s what else: the recipes really work.
I have made: the Fig Newtons, which are far superior to Nabisco’s, the Margaritas, which were the best I’ve ever had, the chicken soup with rice, lemony Greek style, which for some reason, I’ve always shied away from, and the croissants. A day into that last project I was convinced I’d killed off the yeast with too-hot milk. But no, it worked. I served a couple mini-croissants to my husband with tea and gloated over their success.

Aside from the croissants, this doesn’t seem like a very ambitious list. Yet I am a good cook: I’ve made individual beef wellingtons, my own puff pastry from scratch and swooningly good ice cream.  I also make a mean martini.

But this book is growing my confidence. I have now made the bagels am curing my own pancetta and will try making the Camembert. I am, in fact, thrilled as I make out my shopping lists.

The reason has to do with something Reese says in her afterword: “Big food companies flatter us by telling us how busy we are and they simultaneously convince us that we are helpless. I am moderately busy, but not all that helpless. Neither are you.”

That something so basic to our comfort and happiness should be surreptitiously swiped and then sold back to us in vastly inferior forms is criminal. Perhaps it’s not a felony, but it’s a sneaky and undermining misdemeanor.

Make the Bread has about it a certain trial and error toughness that allows for the occasional, educational failure that is momentarily mourned and then fed to the dog.
Consider Reese’s experiment with goats, which she decided to buy because she had become an enthusiastic cheese maker.

Goats are an exceedingly tricky wicket. Cooperation never, ever makes an appearance on any caprine To-Do list, so you can imagine what happened. Reese spent upwards of a thousand dollars on feed, housing, vet bills and stock—and never got a drop of milk. But Reese is a good enough sport to love her goats despite it all.

The great thing about her Trial and Error approach is that she admits that a certain percentage of her projects flopped, and were not worth repeating. But they didn’t stop her from trying something else.

Psychologist Carol Dweck of Stanford University says that most people have either a performance orientation or a learning orientation. In the former, it’s more important to do well, to get things right, than it is to learn. So if a performer flubs a new challenge, she will likely give up and go back to something that she can do well. Someone with a learning orientation will see a mistake as a temporary thing, requiring another try, a different way.

The performance orientation can kill creativity faster than almost anything. If all your attempts must be successful in order for you to maintain your self-esteem, you will live in a very careful, rather dull little box.

This is not to say that performance doesn’t count. There are times when you need to learn your lines perfectly, when you really need the soufflé to rise, and when you must turn in clean, error-free copy.

But that’s not all the time. You’ve got to have some room for experiment. Give yourself a grade-free zone in which you can dare to make some mistakes. Your creativity—to say nothing of your dog‑‑will thank you for it.

The illustration is of my homemade pancetta hanging (unfortunately, sideways)—and we hope, drying, as opposed to lurking—in our cellar. Mice or raccoons have yet to discover it.

Posted by Cloudlands at 10:34 AM No comments: