Canning with my mother's ghost 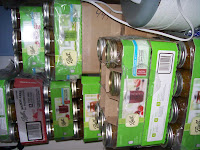 Canning with my Mother’s Ghost by Stephanie Greene

The garden has been producing at such a pace that I have been canning and drying food for weeks. I figure that if Mother Nature can serve up all this bounty, the least I can do is use it.

It all makes me think of my mother, Janet Greene, who wrote Putting Food By with Ruth Hertzberg and Beatrice Vaughan). She often had me chopping rhubarb for rhubarb ginger jam or stirring a vat of boiling peaches on some sweltering day when I’d have much preferred bobbing in the West River with my friends.

My mother loved murder mysteries and she loved to cook, so food preservation, with its botulistic edge of danger, united these two enthusiasms rather elegantly. She would often expound on the crafty Botulinum bacterium which lives in soil. Its spores are extremely hard to kill--merely boiling water won’t do it. Plus, they thrive in an absence of air, and in moist environments.

This was an enemy worthy of respect.

When she was working on the book, which went into four editions, we would race down to the PO and pick up her copy of the MMWR, The Morbidity and Mortality Weekly Report, published by the Centers for Disease Control out of Emory University. Once home, it was read out loud. All too often there would be an account of some housewife who’d reused old mayonnaise jars (or worse, their grungy lids) to preserve tomatoes and had killed off her entire family.

This would get her going on the litany of bad practices it was her duty to scold people out of. Tepid boiling water baths, haphazard time keeping, slapdash sterilization could all send you to an early grave.

It was when I embarked on canning diced tomatoes that I really began rereading my mother’s book in earnest. I recalled her lectures about the dangers of low acid tomatoes, since acid and salt can kill bacteria unfazed by heat alone. For once, I followed her directions carefully. I even got up one morning and redid some roasted green tomato jam with more vinegar, more salt, more heat.

Nobody else could get such a bang out of a pickle, or make canning so exciting. After all, unlike reading Elmore Leonard, the next corpse could be yours.

Posted by Cloudlands at 6:57 PM No comments: