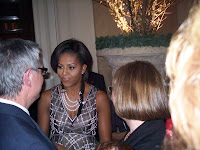 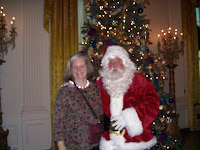 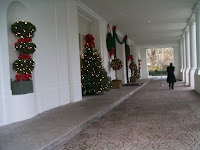 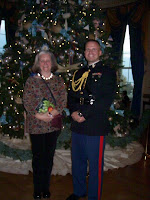 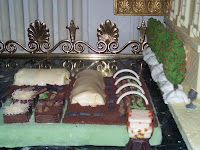 The People’s House
You know how political parties like to raise money by sending emails offering you a chance to meet, say, Nancy Pelosi (if you’re a Democrat)? You merely have to donate $5, be entered in a raffle (along with 79,000,000 other people) to win one of two places at a reception for 500. I thought it was one of those emails and ignored it
Three days later, I got an engraved invitation in the mail, stating that the First Lady requested the pleasure of my company at a Holiday Open House at the White House.
This, the first holiday party of the season, was for volunteers. As a volunteer for Organizing for America, the issue-driven arm of the Obama campaign, mine was one of the names submitted by Vermont’s OFA coordinator. Two names from VT OFA were chosen, mine and that of another woman from Warren, VT.
When the engraved invitation came, I told my husband I could never go, being so busy and frugal. What business did I have in DC?
He wondered just how many times I thought I would be invited again TO THE WHITE HOUSE?
I smartened up, made reservations and jumped onto Amtrak. As luck would have it, the innkeeper where I was staying was also attending the party. She works in the Correspondence Office, sorting, answering and cataloguing mail. There are over a hundred volunteers handling the bags of letters that arrive daily.
It is a heart stopping moment to walk into the beautifully decorated foyer and have an officer in impeccable dress uniform say, ”Welcome to the White House”. I had to fight back tears.
There are places on earth where you can feel the presence of generations of devotion. Often they are places of worship: I’ve experienced it in churches and kivas, but this was different. This was dedication to an ideal of equality, and democracy. It was palpable walking in the door, as we checked our coats, signed holiday cards for soldiers stationed overseas, and were ushered into the party.
It is the Obamas’ mission to make this the most accessible White House in history, truly the People’s House.
There were about 500 people there-- of all races, creeds and persuasions, from every state, all having a wonderful time, taking each other’s photos, chatting up the elegant service men and women, listening to great music, eating amazing food.There were the first timers, Obama fans like me, and there were volunteers who’d seen Presidents come and go for decades.
I learned that people take vacation time to come decorate the White House for the holidays; some from across the country. One man I talked to had been coming to decorate for 30 years. He was quick to point out that he wasn’t an artist; he just climbed the ladder and positioned ornaments as directed.
The volunteers in the Correspondence Office answer the incoming mail. The favorites are from children. One little boy wrote an illustrated letter explaining how to contain the Gulf oil spill. Just pour 5 tons of superglue into the well, that would seal it. He drew a dead fish at the bottom of the page.
I met and compared notes with OFA volunteers from all over the country. I traded stories with a Texas volunteer about snowstorms and sandstorms. I now think the latter are far worse.
We got to enter rooms normally roped off during White House tours. The Blue Room, the Vermeil Room, the Red Room were all gorgeously decorated.
I found the portraits of the First Ladies more revealing than many of the Presidents’. Pat Nixon’s was wistful, quite sad. Jackie Kennedy seemed very elegant and isolated. Mamie Eisenhower was girlish, charming. Hillary Clinton was energetic and apple cheeked in a pants suit. Eleanor Roosevelt’s was the only one with multiple studies, which depicted her as the tireless worker for human dignity that she was.
The traditional gingerbread house this year was a replica of the White House frosted with white chocolate. There was even an outsize statue of Bo, the dog, and a model of the White House vegetable garden, including the bee hive.
In the crush to see and photograph Mrs. Obama, I took numerous pictures of the backs of people's heads before I finally could get a good photo of her. I did get to shake her hand and tell her that we love her in Vermont. She replied that she had to get there (well yes, she does: VT is the first state that went for Obama in 2008).
As Congress reconvenes, I wish our leaders the commitment to service, the impeccability and cooperation so evident at the White House. And I wish every American the good fortune to visit the People’s House.
Posted by Cloudlands at 6:01 PM No comments: