Salamander Eggs in the Hemlock

“Look at nature, work independently, and solve your own problems.”
—Winslow Homer

Nature is, of course, the essence, the greatest example of creativity. I was reminded of that when we were cleaning out the old pool. A huge hemlock had fallen into it during Hurricane Sandy. Marshall had sawn up a few of the logs, but some of the tree was buried in snow and he couldn’t get to it. Things were no easier come spring, when the drain had clogged with gunk and the water was chest high, the tree half submerged, still.

We rented a water pump at True Value. It was a solid little workhorse with three inch suction and discharge hoses. They said that it didn’t matter if you had the machine on the edge of the pool and stuck the suction hose vertically down. Oh but it did matter. The engine had to work too hard to pull the water up, and we got only the most pitiful trickle of water for our trouble.

That night Marshall downloaded Honda’s instructions, which said to have the suction hose as horizontal as possible. The next morning, we put the pump in the pool, at the dry end, and soon had water gushing out.
As the water receded, we noticed blobs of jelly with little black dots in them lying on the leaf debris in the pool, and one suspended improbably on a hemlock branch. I carefully collected them in a bucket, added some water and put it aside.
After about five hours of pumping, the pool was almost dry. I started raking up the old leaf muck and found the most beautiful black salamanders with yellow spots hunkered down under the leaves—fifteen of them in a ten foot stretch of muck. I carefully put them into another bucket and brought them to the little stream that fed the pool. I put them in a mound of leaves right by the water.

When I brought the pump back to True Value, I started talking with a woman who seemed to know a lot about spotted salamanders. They need to be in a vernal pool, i.e., no fish to prey upon them. They lay their eggs and then burrow down beneath the leaves; in fact their other name is mole salamanders. They can live to be 32 years old and usually return to the same vernal pool to lay their eggs every year.
Now we have to find a good vernal pool to hatch these eggs. The upper pool that feeds the swimming pool is going to be dredged, since it’s filled with silt over the years. But only one side can be reached with the backhoe. So they’ll be placed carefully on the other side. 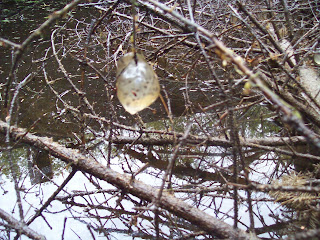 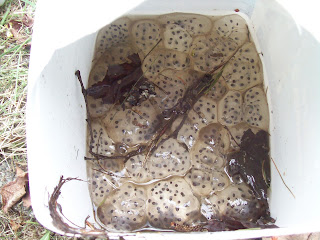 It’s a nail-biter. I want all 500 (or so) to thrive and live rich lives--to the age of 32, at least. But not all of them will—and I hope my intrusions have not doomed them.
I’m rewriting my novel, current working title, Please Love Your Life. It’s mostly cutting right now; Amy Hempel’s advice is good—cut out the boring parts. I go through cycles of worry and delight, trying to keep some equanimity in the process.

Every inspiration is a surprise, like those eggs, dangling from hemlock branches. I try to do right by them; sometimes it works. What I learn from nature is to keep trying, with the same wild hope every time.


Posted by Cloudlands at 3:15 PM No comments:

Recently I’ve been sent a lot of pieces of writing. I’ve learned enough about writers, especially fledglings, to know that people rarely want a critique. They usually want to be told they’re talented, to keep going, that what they have to say is important. From time to time, I’ve sought advice, and have gotten some very kind encouragement. I’ve also been scalded.
So I’ve been thinking about the ways we go public with writing, and how we can undermine ourselves by doing it half-heartedly.

I suspect there is no more poisonous myth than that of Max Perkins taking Thomas Wolff’s enormous manuscript in hand, and editing it into an American masterpiece. It has fostered a terrible fantasy (particularly among young writers and grad students) in which  a writer can turn in an unfinished, formless pile of prose and have someone else transform it into art. It fosters laziness, entitlement and isolation in writers. Before, that is, it kills their talent.
It happens at other stages in the creative process, too, alas. A writer I know has a habit of announcing he doesn’t have the knack for self-promotion, he just wants to do his work and have other people sell it. The implication is that he is too pure, too nice, to sully himself in the marketplace.
I realize I’m talking about two different things, editing and selling, but I think they might be more closely related than they seem at first glance. Because in both enterprises, one must consider the reader.
Many of us enjoy the glorious independence writing gives us creatively. At its most basic, there is just a pen and a piece of paper to accompany the writer’s imagination--no committees, no votes, almost no limits. But if someone else is to read your work, you want to make it easy for her to follow your thinking, be swept away by your ideas and not distracted from that delicious journey by mistakes.
Soon enough one must edit: for clarity, for pace, to make the work more engaging. One must consider the reader. Is the piece clichéd? Does it insult the reader’s intelligence or is it confusing? There are, alas, myriad ways for a writer to give up, and cling to the isolation that makes for self-indulgent writing.
And even the most assiduous self-editor has blind spots, or places where she just flags in getting the idea, in all its richness, across. Which is why another pair of eyes­‑‑or many pairs—can improve a book immensely. That collaboration is a fascinating one. You can have a real and very gratifying meeting of the minds with your editor(s) that pulls you from your ivory tower with a jolt of recognition.
Selling a book, whether to an agent, editor or book buyer, you have to capture the reader’s imagination immediately.
It’s true that you face rejection, indifference, other egos, competition. It’s scary. But it’s also a tremendous opportunity to connect with a reader. All readers want to be captivated, even the most dismissive and cynical. When that connection happens, it is transcendent.
The social media now available give us the opportunity to learn about our readers in many new ways. Let’s be curious.
I’m on my way to “The Muse and The Marketplace” Writing Conference in Boston. I’m hoping to learn more about social media, those powerful means suddenly at our disposal to get our words out as never before. I’m at least as nervous as I am curious and excited. Will I be up to the task of all that communicating?
We’ll see. The ivory tower now has wifi.
Posted by Cloudlands at 5:50 PM No comments: