I like revising. You have something to start with and then you get to make it better. That is the glory of writing—the good stuff stays put—more or less. I can’t imagine being a performer, and having the whole piece to mess up every time I came on stage—in new and awful ways.
Of course there are always the issues of continuity, of flow, of making sense. You do have to “kill your darlings” as Hemingway so famously said of favorite characters or passages that need to be nixed. The story is all.
I say this having just finished a draft good enough to get printed and bound at the copy shop for my two blessed readers. This is not the final draft—probably far from it.
But I’m pretty sure that the characters who die only die once. Unlike the hilarious and awful story Marion Roach tells in her book The Memoir Project. She wrote a heartbreaking death scene, passed it in to her editor and received a note back in the margin, “already died on p. 56”.
I’m less sure that  the characters don’t repeat themselves a bit here and there. Once a bon mot, always a bon mot, right? I will be going over the ms carefully a few more times to catch these embarrassing lapses.
Continuity ‘s a tough nut, though. If I were the sort of writer who told a story from beginning to end, in a linear fashion, perhaps it would be easier. But I’m not. And that’s not how stories even occur to me in the first place. Since I write to figure things out, scenes often occur to me in order of emotional importance. It’s my job to see how (or if!) they fit.
In his superb book, On Writing, Steven King likens fiction writing to archeology. And it’s true, you are dredging, cleaning off little bits, tying to fit things together to see what they make.
The thing that’s helped me the most during this round was to outline the chapters on index cards, so it was easy to find certain scenes. It’s much easier to spot
Mistakes when you’ve outlined...such as someone referring to something that hasn’t happened yet as though it has. With my trusty index cards, I caught a few of those.
Writing fiction is archeology without the dust and toothbrushes, then?
Here’s the pile of pages—actually the last two drafts.
And the tiny gizmo is the flash drive that holds the whole thing en route to the copy shop. 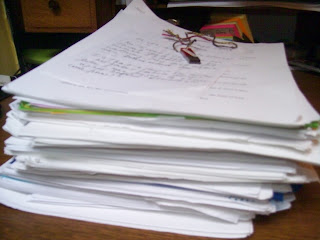 Posted by Cloudlands at 7:38 PM No comments: