One of the thrills of cooking is taking an overlooked or underused plant and cooking it in an exciting new way.

I have a friend who works late in a library one night a week. These sessions are often pretty boring, so one night she downloaded every rhubarb recipe she could find and then made a book out of them. And presented it to me.

There were some unusual concoctions, including rhubarb cordial (non-alcoholic) and rhubarb salsa (truly wonderful).

Rhubarb is too often treated with contempt. The prevailing attitude is that if it grows like a weed, it must not be very interesting, culinarily. Aside from dumping it into rhubarb strawberry pie, most people don’t do much with it. So I decided to enlarge my rhubarb repertory.

Somewhere I have a recipe for rhubarb bread given to me by a dyspeptic young wife who happened to be an excellent country cook. It is delicious—as moist and tender as zucchini bread but with a lovely tart edge that cuts the usual cloy of such dense, heavy sweets.

But there is still a Fridge Clean Out Day quality to the recipe that makes me suspect that if there were a few old tires lying around, they too would be incorporated into a loaf and served up with a smile.

My mother used to make Rhubarb Ginger Jam, which she got from a wonderful Scottish friend. I got the idea for this cake from that. I think it might top carrot cake in its surprising flavor.

Mix flour and baking powder. Add to stuff in food processor.
Whisk together oil, vanilla and egg. Add to mixture in food processor. Whiz. Then add ginger, whiz once more.
Pour into cake pans.  Bake 25-30 minutes, or until an inserted toothpick  comes out clean.

Cool in pans for 10 minutes
Then cool on racks for another 20 minutes or so, remembering to peel off the parchment paper.

Assemble and frost with your favorite cream cheese frosting. I sprinkled bee balm (monarda didyma), marigold and bachelor button petals--all of which are edible-- over the cake. This recipe makes a smallish cake—each layer under an inch high.

Cooking is a quotidian art form.  People need to eat, with a few decent recipes and a little know-how, a cook can bring good cheer and sustenance--if not always delight-- to the table. The terrible mistakes can go onto the compost heap or into the dog’s dish. Not a lot of pressure, and it’s nice to practice an art form that people know they need.
I guess that’s it: with cooking you don’t have to battle the popular Philistine notion that people don’t need art. At least twice a day, that particular lie is scuttled.

While I’m pressing my case, let’s take this another step: cooking closely resembles writing fiction, because you are transforming raw materials—either experience or somewhat uninspiring bits of plants and animals —into something nourishing, interesting, welcoming, even delectable. Other people can enjoy it, and it becomes a new way of experiencing the world. It is deeply reassuring: we humans (surely the nuttiest, most nervous species) have found safe harbor in our often hostile environment. As literature assures us that we are not alone, good cooking assures us that we are not adrift.

And it’s a continuum, isn’t it? At one extreme end of the spectrum, say, is the much-touted Danish restaurant, Noma, which serves deep fried reindeer lichen. I have never eaten there, and have mixed feelings about tasting menus, generally.  But I am intrigued by using wild foods, and by eating (way) out of the supermarket box.

Some of the Noma menus described online are downright peculiar, but I think such an experience is analogous to attending an haute couture fashion show and seeing work by the late, and very great, Alexander McQueen. Few other designers come close to his audacious vision.
Sadly, I have nowhere to wear a bird’s nest on my head, or antlers festooned with lace. Perhaps I could try it for Halloween, the plebeians’ Let It Rip holiday. But I will go lichen hunting, and in the meantime, make a Rhubarb Ginger Cake. 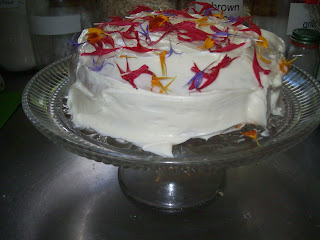 Posted by Cloudlands at 7:55 AM No comments: