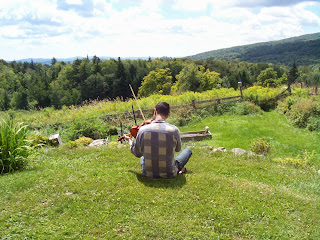 As arts education continues to suffer terrible cuts, I’m constantly looking for proofs that the arts are an important component of anyone’s education. Many educators still tend to see the arts as frivolous, and STEM subjects as being the real, demonstrable engines of progress.
One important thing the arts teach is the value of practice. Our musician friend, Nate Hundemann, recalls starting music in junior high, and being  terrible at it. But over the ensuing months and years, he learned that practice is indeed transformative. For with diligent practice, he became a very good musician indeed. Arts education teaches us that practice is the muscle of transformation.
Some people never learn that. Having been taught that talent is paramount, many people give up on subjects that intrigue them merely because they aren’t yet good at them. That giving up is the source of a lot of despair, especially later on in life.
We over-value early genius but are terrible at nurturing it. There’s this insidious idea that genius flowers without practice, that being naturally good at something is all, and that talent alone will take you where you want to go.
Practice can seem quite mysterious to the novice—how will scales help you play real music? Sometimes you just have to trust and do the work.

A few months ago, I attended an unusual performance in which a young violinist, Rafael Rondeau, played five different instruments—violins and violas—to demonstrate each instrument’s voice. They were all hand made by a local luthier, Doug Cox.
I’m not a musician, so I blithely thought this should be as easy as picking up a story and reading it aloud. It was actually more like speed dating —in front of an audience.
You can’t just pick up an instrument, scrape away, and expect it to sound great. You have to get acquainted and that takes practice. He did practice, on his own violin beforehand, trying out pieces that might highlight each instrument’s unique voice. But it was a gamble. That Rafael agreed to perform in this manner, without prior introduction to each instrument, is testimony to his diligence, skill, and let’s face it, bravery.
I used to fling myself into new pursuits without warm-up. I was fueled by  impatience, curiosity and a vast ignorance that may have looked like overconfidence, even arrogance. I was not at all assured of success, though. More often than not, it was a bruising way to go about new challenges.
It began to occur to me that perhaps the fling n’ flail method could be improved upon. I like success, and have noticed that planning well increases one’s chances of achieving it.
Perhaps you could say that practice is a kind of blind planning, whose endpoint, mastery, isn’t always visible from where you are. Not very glamorous, but it’s essential.